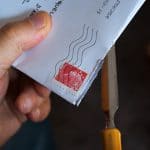 With the classic letter post, there are many things that you would rather not get. However, the danger is generally low that the letter flies around your ears when you open it or you accidentally give the letter writer access to his bank account. For emails, the situation looks different unfortunately ...

What types of threats are there?

In the case of phishing emails, criminals attempt to access your online accounts or your credit card information under a pretext. Here, the fraudsters pretend eg as your bank, your e-mail provider or as an online shop. Phishing emails are usually professionally designed and indistinguishable from a genuine email from your bank or counterparty.
Typically, such emails ask you to do something urgently to avert consequences such as blocking your account, high dunning fees or similar inconvenience. For this purpose, you should log in under a certain, usually in the mail linked page with your access data. Of course, the Internet site mentioned does not belong to the alleged provider, but is often a well-made forgery, which is operated by the fraudsters. The captured access data will be used to shop at your expense or commit further crimes on your behalf. Furthermore, there is a well-organized trade in captured data, which in turn is bought and used by other criminals.

For malware emails, the perpetrators try to infect your computer or your entire network with malicious software. For example, these programs allow the attacker to gain full access to your computer, spy on data, or add computing power and Internet access to a so-called bot network for further action. Another threat that has become increasingly common lately is so-called Ransomware attacks, Here, your system is encrypted by the malicious software and then extorted from you to pay a ransom for the decryption code.

Spam mails are rarely directly threatening, but rather annoying.

As spam you can actually look at any unwanted advertising e-mail. Often fakes of branded products or medicines are offered. But at the latest when buying these drugs, there is danger to life and limb.

How do you recognize dangerous emails?

Often dubious mails come from senders like Safety @ IhreBank.XXXYYY.com
Here, the part "security @ your bank" pretend that it is a real mail from your bank. The actual sender is XXXYYY.com. Also the sender Safety@478-IhreBank.de has probably been set up specifically for fraud.
The e-mail with the sender - Your bank <Susi1989@####.de> - probably comes from a hijacked, private account but certainly not from your bank.

In order to keep the effort low the fraudsters often use general forms of address such as "Dear customer,"Or"Dear Sir or Madam,„.

The senders of criminal mails usually try to mislead you into hasty actions. It is either a threat to avert or a unique opportunity. Be especially vigilant here.

E-mails that ask you to help someone unknown in financial transactions should also be discarded.

If you receive alleged e-mails from a bank where you do not have an account, the fake is quickly detected. But even details, such as a wrong customer number can be a hint. Even if contact is unexpected, caution is advised.

Some dubious mails are already noticeable by bumpy wording or poor spelling.

This text makes no claim to completeness and does not represent a substitute for individual advice. Please also note ours Legal Disclaimer.

Do You Have Questions? We will call you back:

Lieselotte Krause
Rated 5 out of 5

Thomas Popiel
Rated 5 out of 5

Christian Bochert
Rated 5 out of 5

Wolfram Diem
Rated 5 out of 5

Very responsive and professional, Much apprecaited for his work

Bernd Wiemann
Rated 5 out of 5

Thomas Schumacher
Rated 5 out of 5

Thomas Popiel
Rated 5 out of 5

Mr. Mutschler has always been competent, friendly, helpful and quick in advising and helping us with all questions concerning computers. We can definitely recommend him to others.

Ulrike Pilz-Kusch
Rated 5 out of 5

I have only had good experiences with Mutschler.IT. I am already over five years customer and very satisfied with service and performance. For questions about my computers and the software I received help without any problems. That's why I can only recommend the company.

Casy Freyer
Rated 5 out of 5

Christoph iron
Rated 5 out of 5

Andreas Pink
Rated 5 out of 5